Book cover for “Spider in a Tree” by Susan Stinson

I recently completed a book cover illustration for Small Beer Press, Spider in a Tree by Susan Stinson. It will be published in October 2013. The cover has been released, so I can now share it and talk about the process! This was a really fun one for me.

About the book: “Jonathan Edwards is considered America’s most brilliant theologian. He was also a slave owner. This is the story of the years he spent preaching in eighteenth century Northampton, Massachusetts.

In his famous sermon “Sinners in the Hands of an Angry God,” Mr. Edwards compared a person dangling a spider over a hearth to God holding a sinner over the fires of hell. Here, spiders and insects preach back. No voice drowns out all others: Leah, a young West African woman enslaved in the Edwards household; Edwards’s young cousins Joseph and Elisha, whose father kills himself in fear for his soul; and Sarah, Edwards’ wife, who is visited by ecstasy. Ordinary grace, human failings, and extraordinary convictions combine in unexpected ways to animate this New England tale.”

To start, the publisher sent me this watercolor painting by Lewis Miller (a Pennsylvania Dutch folk artist) of the interior of a colonial meeting house.  Because the book centers around Northampton, MA and the former meeting house there, they wanted me to draw a similar illustration, replicating the naive feel. The author provided me with an actual seating chart from the meeting house at the time of the events in the book, so using that and other reference material, and the illustration by Miller (which they really wanted it to be similar to), we have this cover! 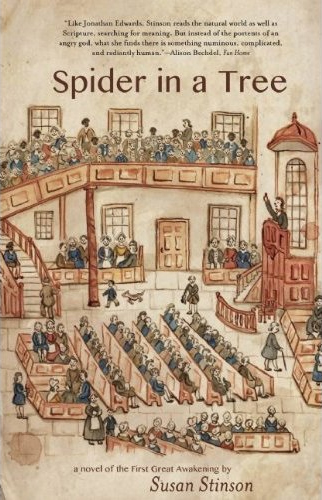 Now for some process images: 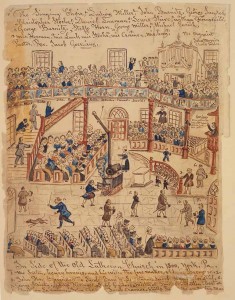 Here, again, is the original watercolor painting by Lewis Miller from the early 1800s. 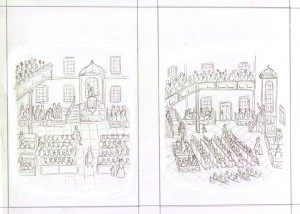 Here are a couple of sketches – they liked the one on the right, more similar to the Miller reference. 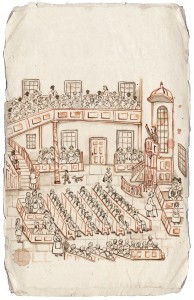 This is the final drawing before going into it with color. Ink and watercolor. I added the paper texture digitally.

We had gone over, using the seating chart and historical accounts, where people sat – women, men, widows, families, African-Americans, young people… Orderly in terms of sitting, yet still pretty chaotic inside with people walking around, animals, etc.

And here is the final illustration without the book title/author text: 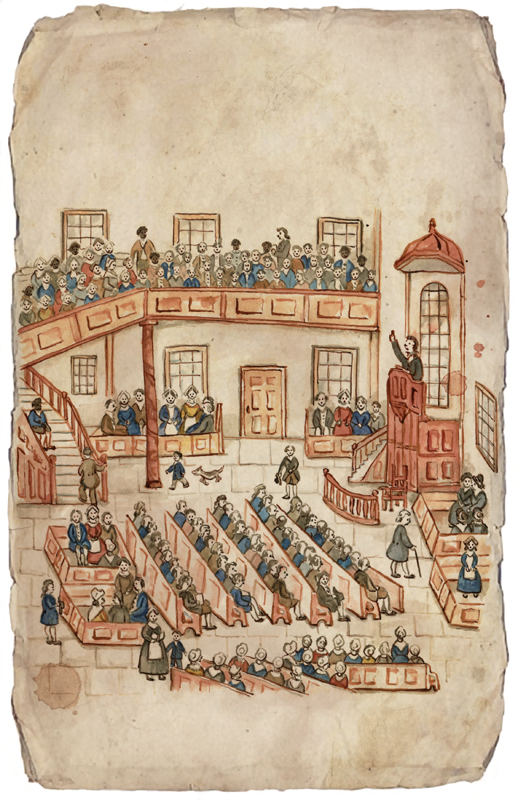 It was such a fun project and I really enjoyed the challenge of drawing ‘naively.’ As a realistic artist, it is actually really hard to draw–not sure how to put it–not skilled yet skilled? It’s just hard to be naive when you aren’t! Anyway, eager to read the book!!