Alas, I think the time has come to retire this blog. My posts were so infrequent, and there are many other places where you can find me where I actually update often. I will list a few of them here, and will update the list if I find myself frequenting some other future place often. I am keeping this blog up for posterity (I hoard all of my internet past!) but am unlikely to update it.

Here’s one final image! I just created this painting for the Changeling Artist Collective “Haunted” auction – this is a collective of artists (including myself!) and we hold monthly themed auctions of artwork over on Facebook. This painting was created for this cool frame I found in an antique store, and it quickly found a new home. There are some amazing and fun artists in the collective and I am honored to be among them! 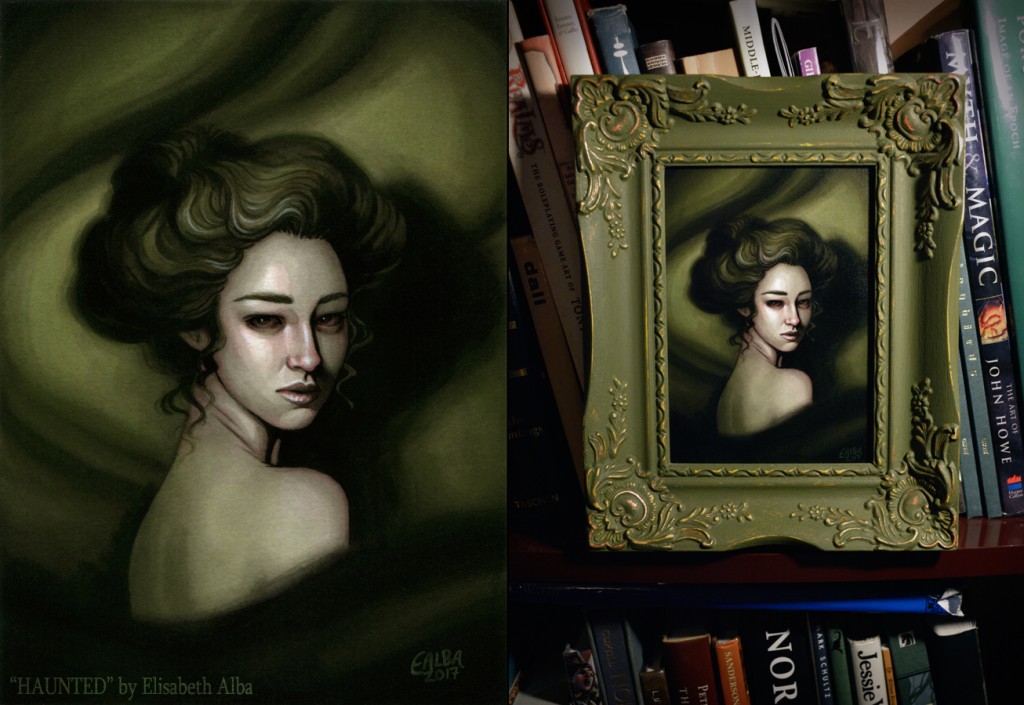 And I have a Tumblr: albaillustration.tumblr.com/

As for shops, you can find me at Etsy and Redbubble and I have a list of available paintings for sale at www.albaillustration.com/available.html that I will keep updated.

I did two of the challenges this month, Innocence and Metamorphoses. Their counterpart in the previous Month of Fear was Wicked and also Metamorphoses.

Since I painted Von Rothbart, the villain of Swan Lake, for Wicked in Month of Fear, I decided to paint Odette, the cursed swan princess, for Innocence. 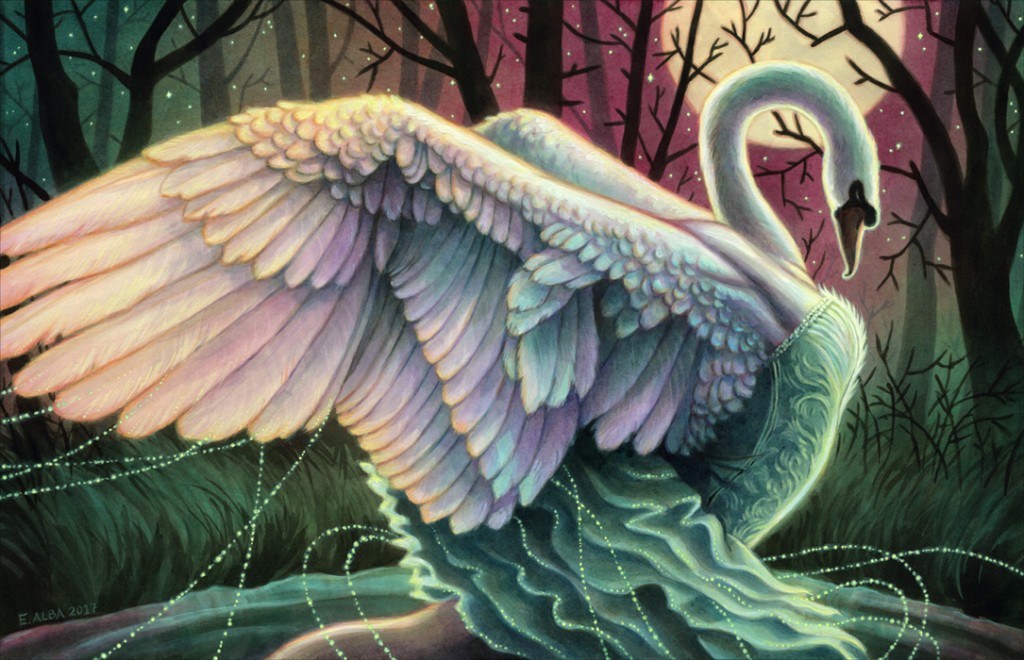 For Month of Fear, I painted a shapeshifting snake woman for Metamorphoses. For Month of Love, I took inspiration from the Welsh mythological tale of Blodeuwedd, a woman formed from flowers. 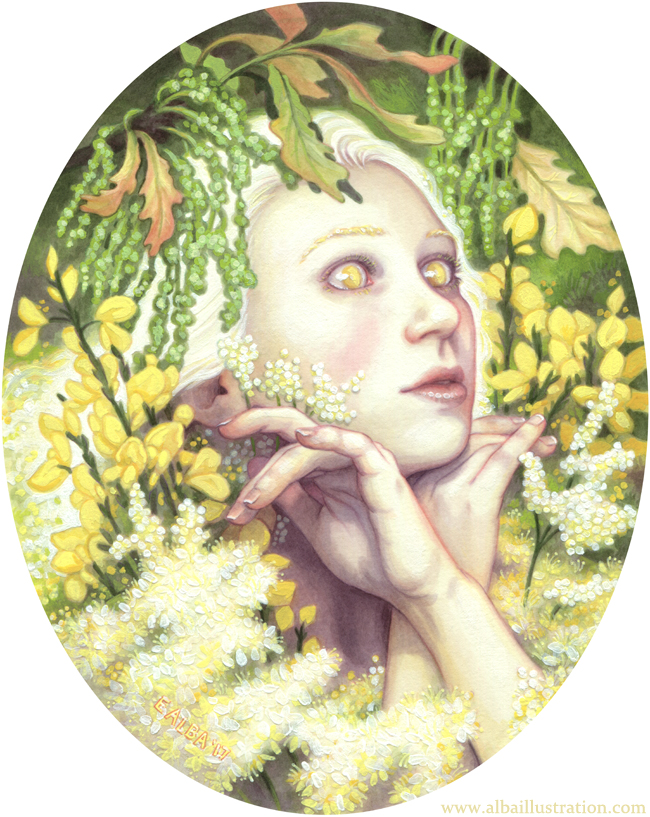 Updated Cover for The Thorn Queen

For the past few years I have been working with an author, Elise Holland, on her middle grade novel The Thorn Queen, at www.whyismud.com. I’ve posted about it before – I completed some illustrations for the design of the website, and have been illustrating the chapters as they’ve been published online. I recently revamped the book cover, which is what I’d like to share with you here! 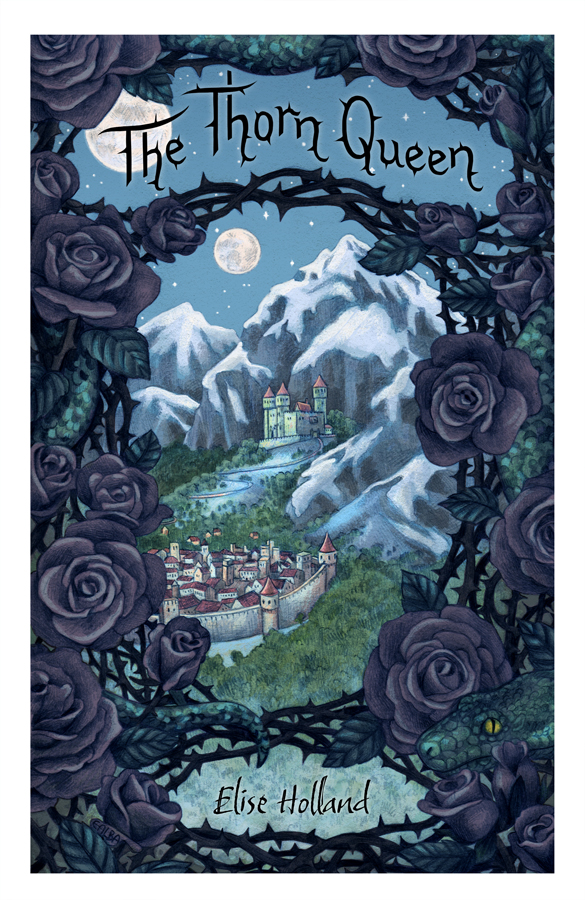 I wanted to keep the style consistent with the other images I made over the years for the website, so the image is a pencil drawing colored digitally. Elise and I wanted an image that would invite the reader into the world of Glendoch, but with a hint of menace!
Definitely check out the book – it’s a lot of fun!

Hidden to most, this glacial world once crackled with beauty. Now it waits for war—divided and bound by strict rules. So when twelve-year-old Meylyne trespasses in the Above-World and falls from a tree on Glendoch’s sickly prince, she must flee or face imprisonment in the Shadow Cellars. She is convinced she will perish, yet with the help of her friends she inches her way back home … until the day she collides with the Thorn Queen.

And home just got further away than ever.

After over two years of working together, Deborah Blake and I were finally able to meet in person! Deborah is the author of our tarot deck, the Everyday Witch Tarot, published by Llewellyn (and she’s the author of many other fabulous books!).

Both of us put together special editions of the deck that came with various goodies, including the box for the deck being signed by both of us. Scott and I drove to her place in Upstate New York on our way to visit friends in the Catskills. It was marvelous to meet up and meet her cats, and she got to meet our dog Rayo! We had fun chatting and signing.

Here are some pictures! 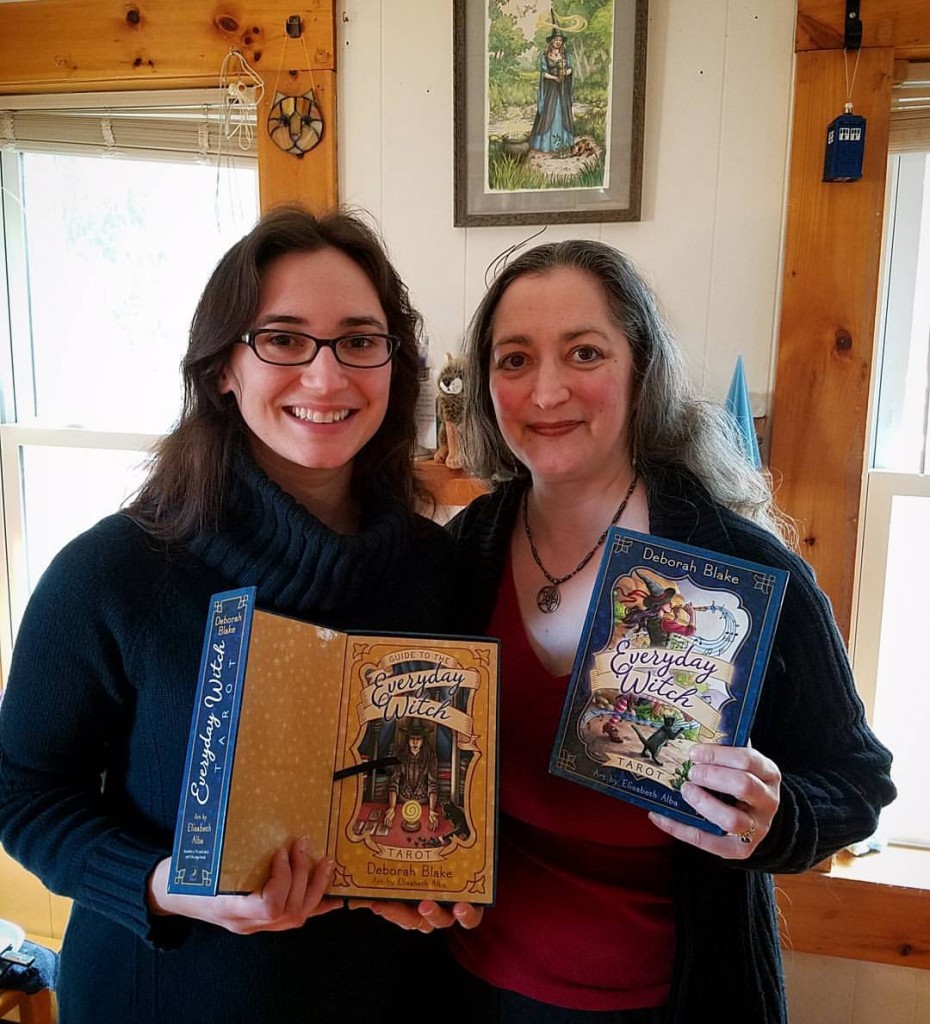 Holding our deck! I gave her the Ace of Cups painting which you can see framed above our heads. :D

We discovered our crazy resemblance to each other!!! Look at that! 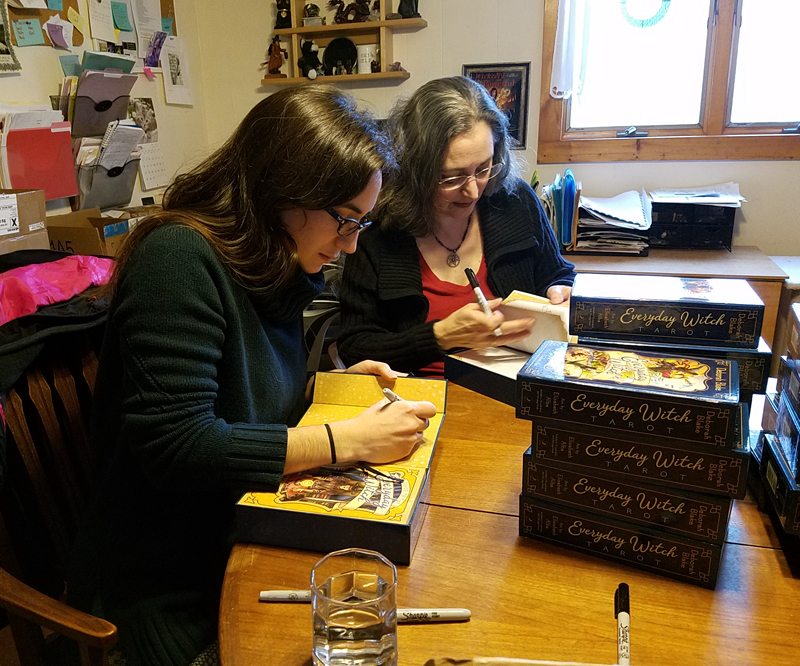 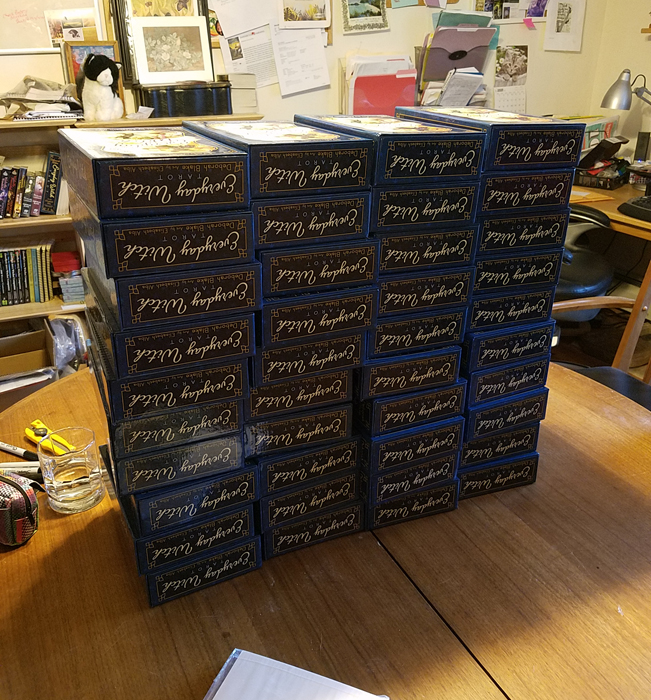 All forty of my stock that we signed. 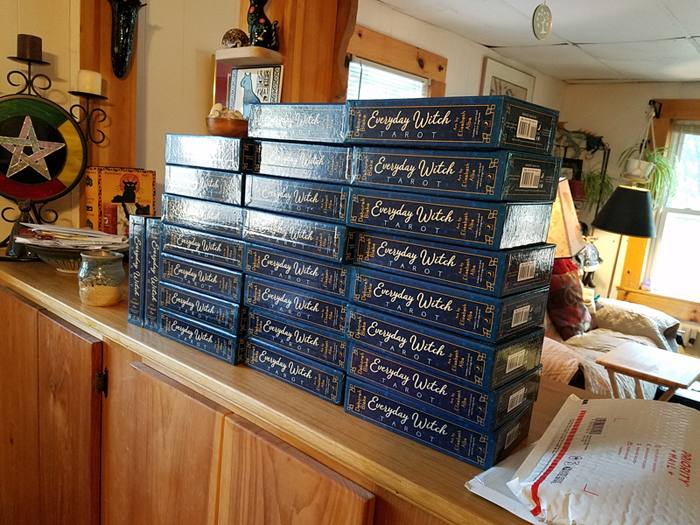 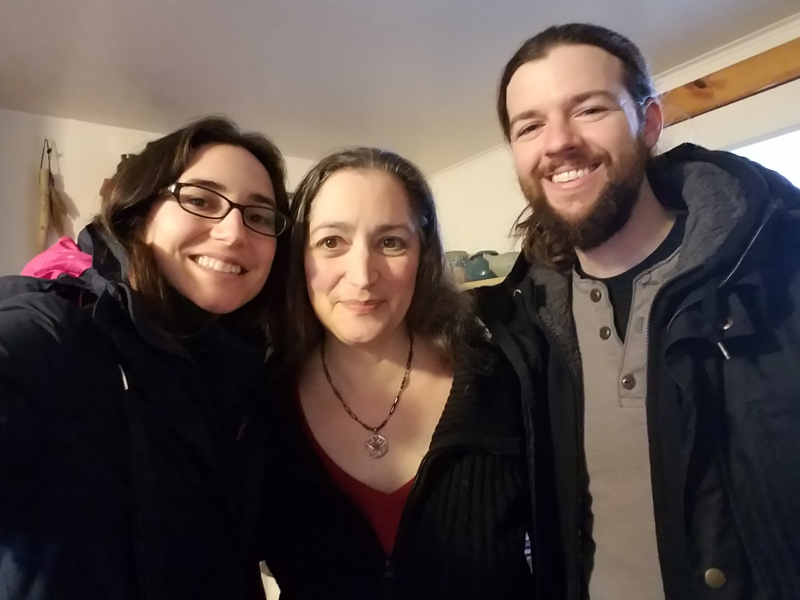 The three of us together!

Check out my Etsy store at www.etsy.com/shop/albaillustration if you want to order the deck or prints of the cards! 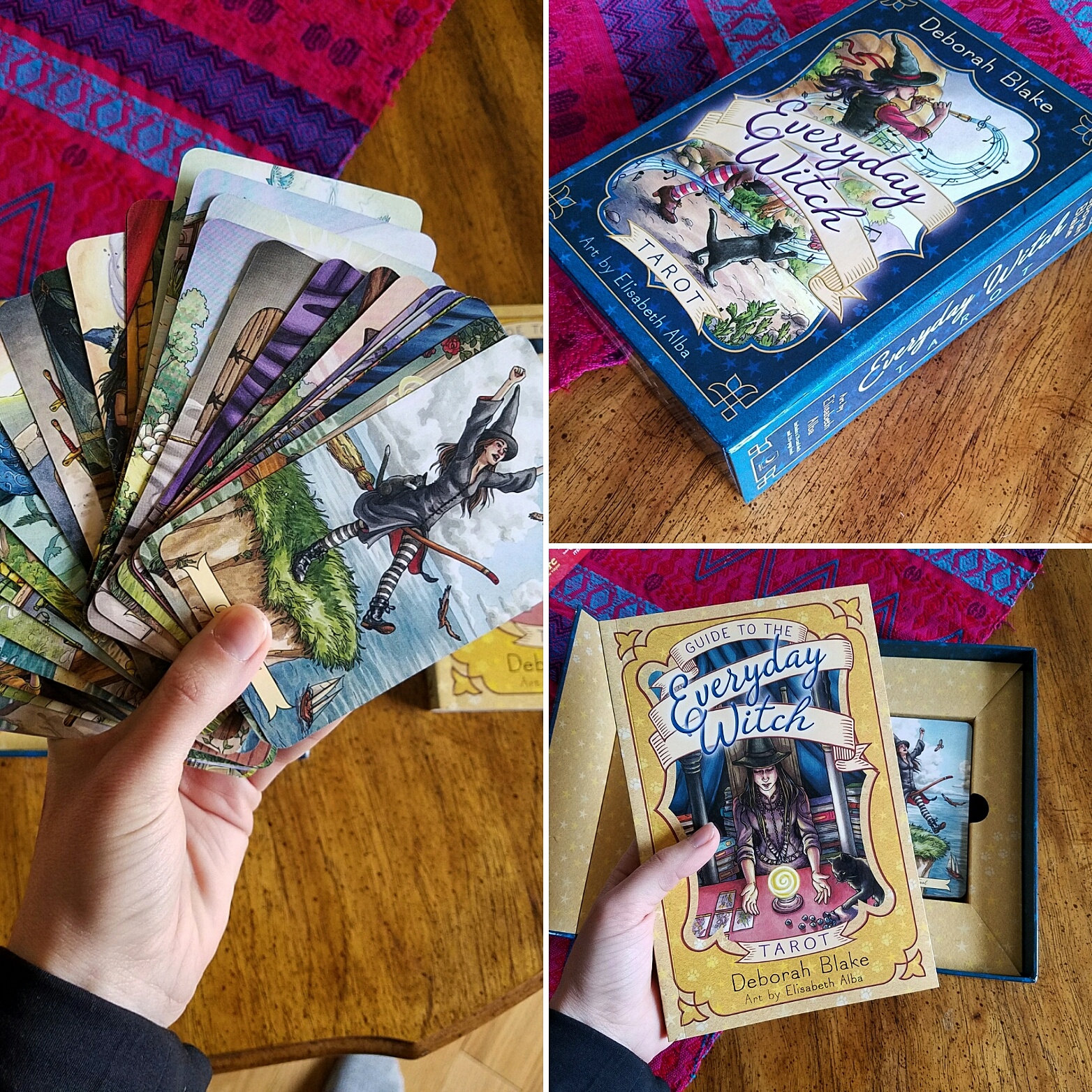 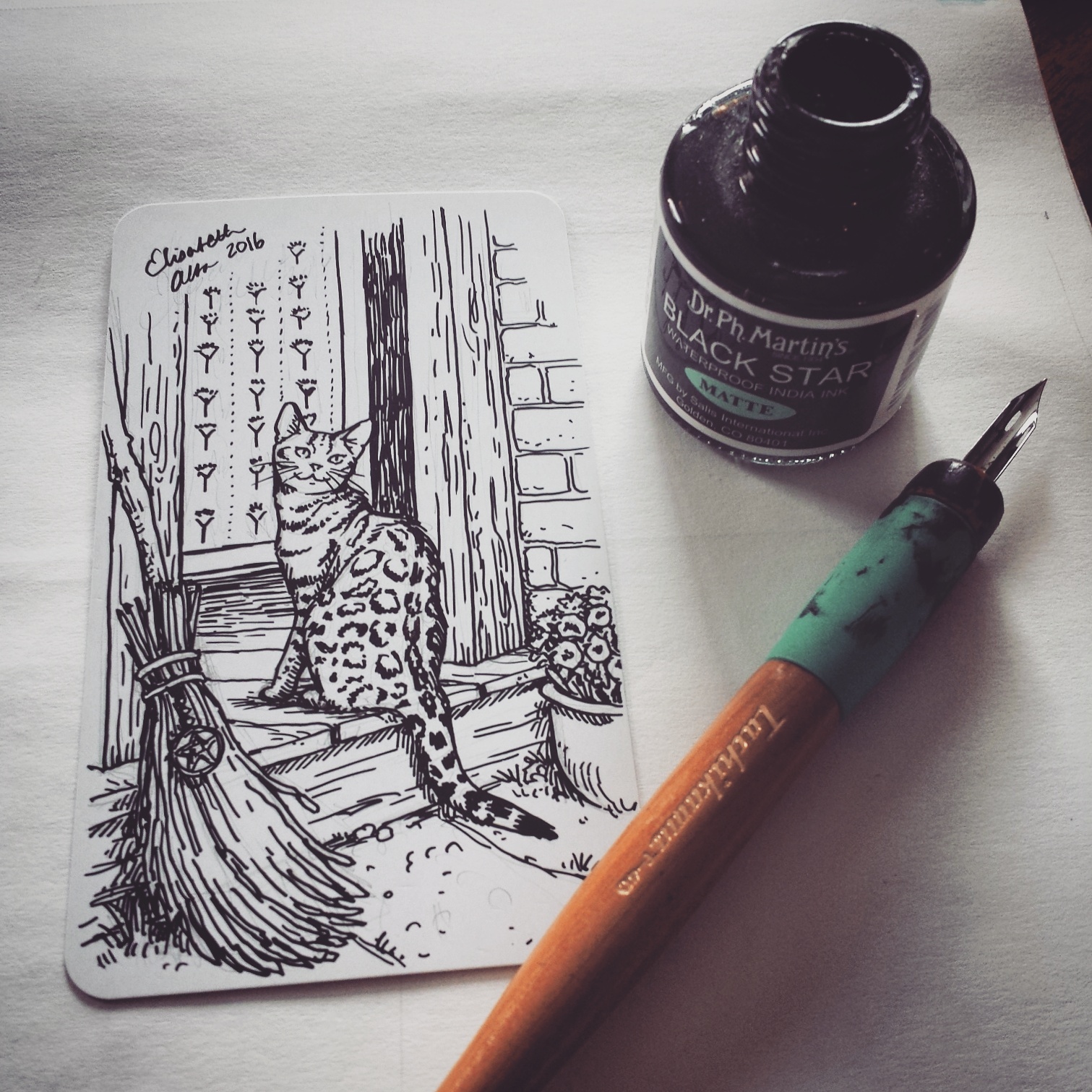 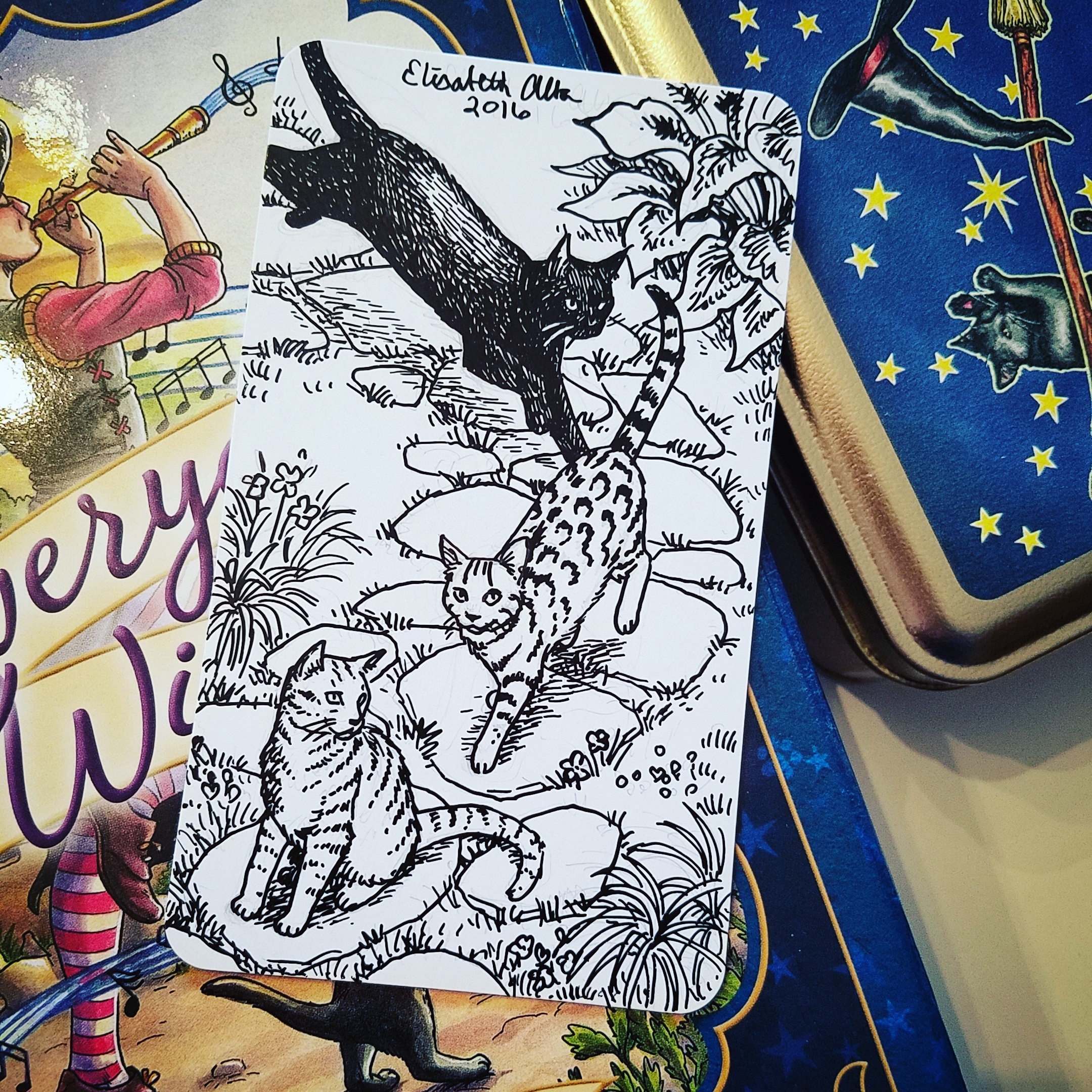 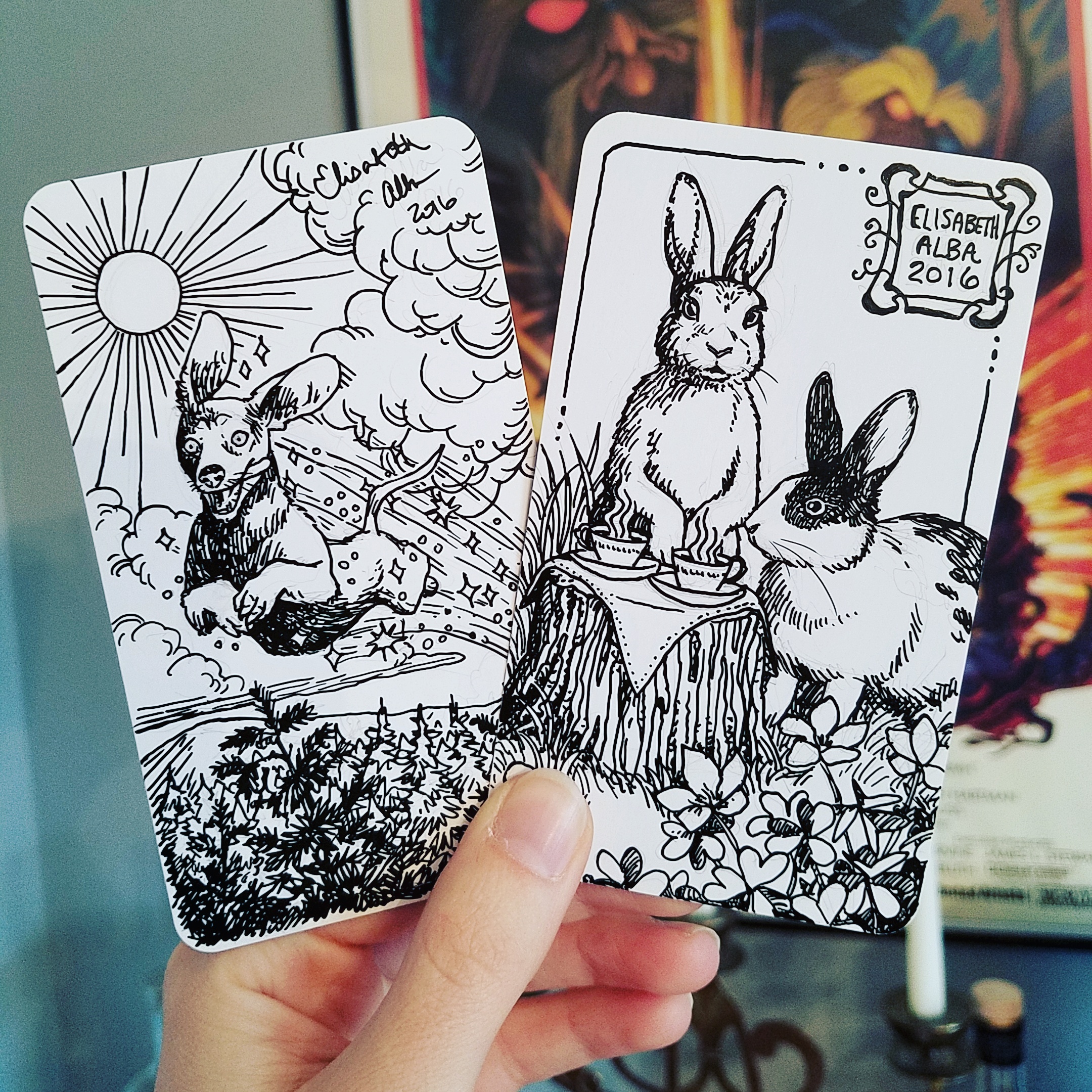 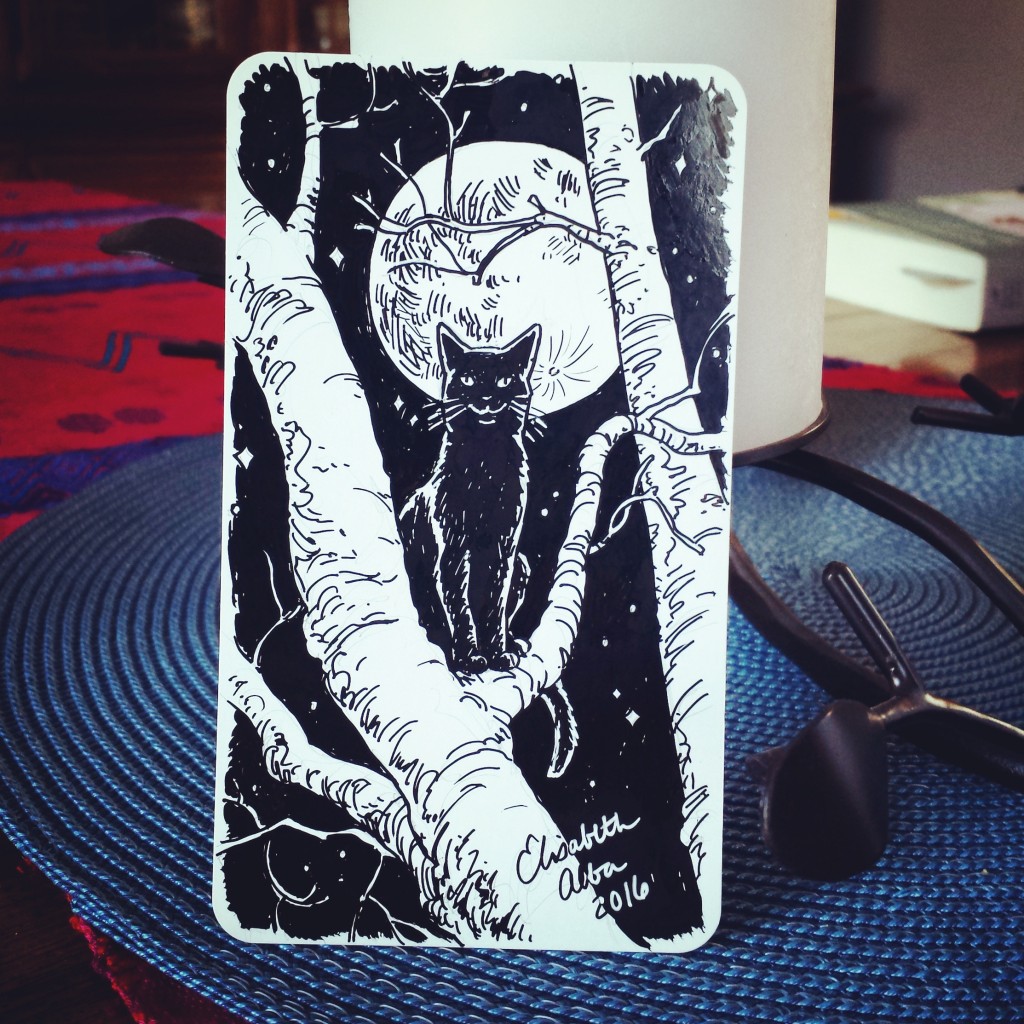 One Month till Everyday Witch Tarot!!!

Only one month left!!! ONE MONTH!!! It’ll be here before we know it. 2017 is looking up!
Deborah and I can hardly contain ourselves, we’re so excited to see the Everyday Witch Tarot in person. So we’re going to throw another GIVEAWAY!

But first! We’d like to announce that we are now taking pre-orders for the Everyday Witch Tarot Special Edition. “Special Edition?” you ask. “What’s that?”

Here are the details! 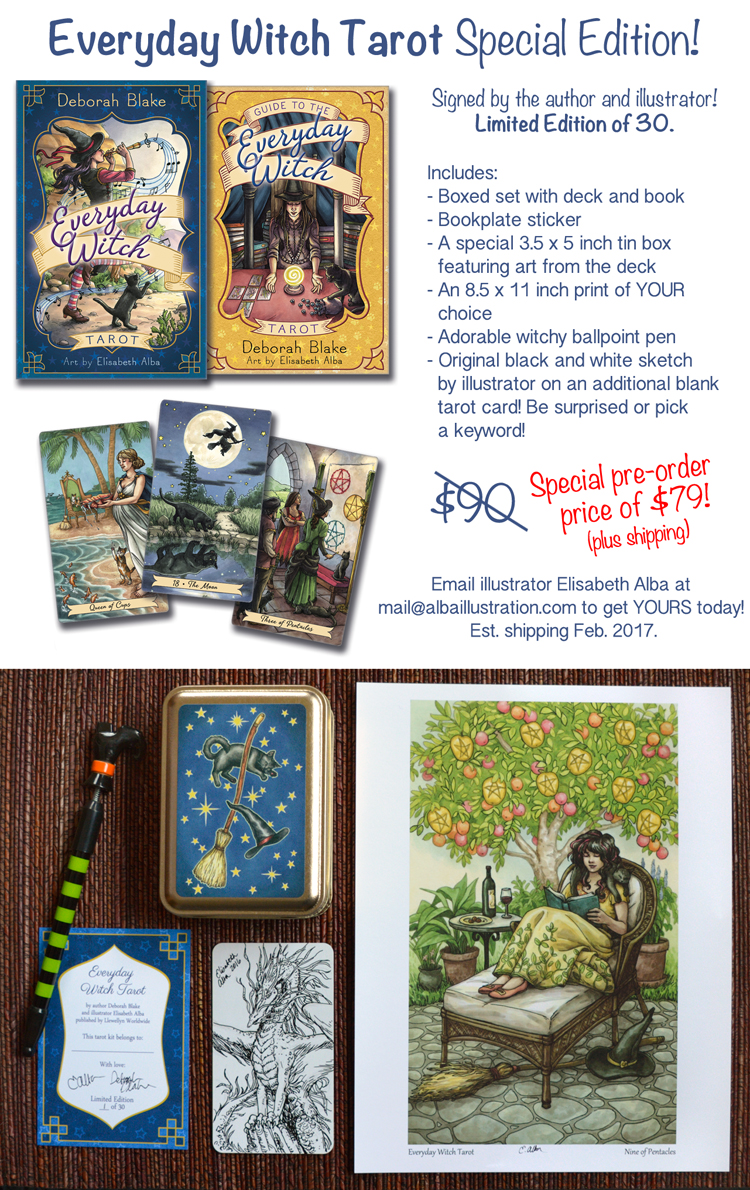 There are only 16 spots left, so order yours today for the special price! After publication on January 8th, the price will go up to $90. See that dragon sketch above? One of our early collectors requested “dragon” for her keyword. I had a lot of fun with that one!

One thing I love about this Special Edition is that I get to meet Deborah Blake in person! We’re going to meet up in January after the deck comes out to sign everything together. I’m really excited! There will definitely be a blog post with photos of the meeting, signing, and merrymaking.

And now for the GIVEAWAY!!!

This time Deborah is giving away either Llewellyn’s Witch’s Coloring book OR the Hip Witch Tarot – your choice of one! I am giving away a signed print of the Ace of Cups. Go to Deborah’s blog post at http://deborahblake.blogspot.com/2016/12/one-month-until-tarot.html to enter the giveaway. Good luck! (: 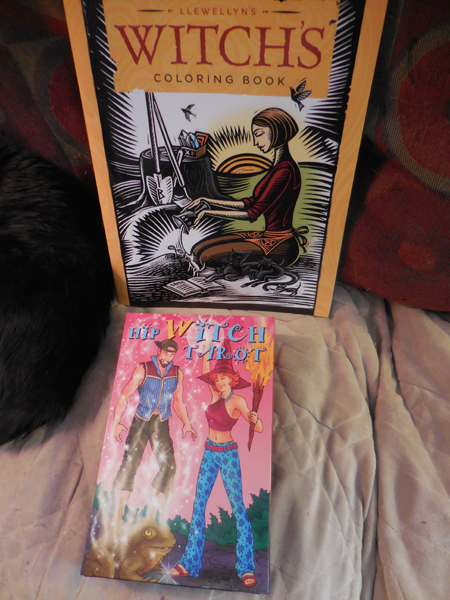 You can pick either the coloring book or the tarot deck! 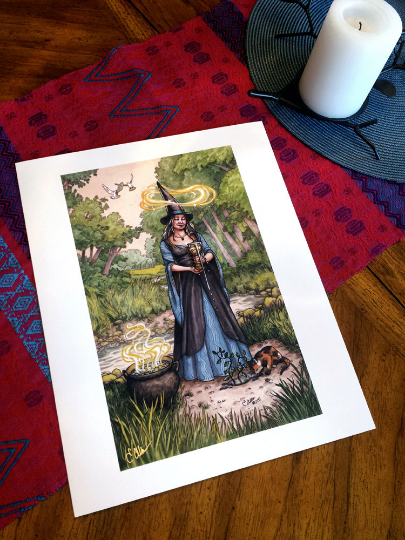 The signed print of the Ace of Cups from the Everyday Witch Tarot!