This map was a really interesting project for Scholastic for their new time-travel, adventure series, Infinity Ring. I had to design the map on top of a ‘game board’ that had an accurate grid layout of where everything should be placed. They also gave me substantial art and photo reference for the buildings. Everything had to be on separate layers. I also drew a blueprint of the main floor of the White House which you can see in the final map. A large printout of the map is included with the second book in the series, Divide and Conquer (check out http://www.infinityring.com/books/divide-and-conquer). 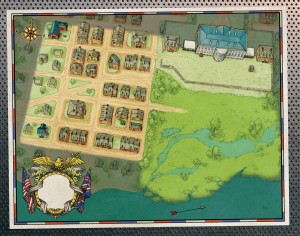 What makes this series really cool is that you can play a pretty cool computer game on the Infinity Game website. Episode 2 follows the characters as they race around Washington, D.C. and complete various tasks, just before it was burned by the British in 1814. My map was created specifically for this online game. I had a chance to play it, and it was actually really fun to play, with great graphics, sound, and takes some skill.

Here is how the map looks printed and on the Infinity Ring site. As you can see, the colors were made a little more saturated to be more interesting to kids’ eyes. The graphic designer added pins and text and the legend. I drew the blueprint of the White House and the designer put it on blue paper.