Hi All! Well Deborah and I don’t know the exact publication date yet, nor can we share the packaging design, but at least we have less than a year until publication! We’re so excited! We thought it was time to share another image.

The 5 of Wands… when I first read the description that Deborah wrote, I was dreading working on this image. The description: “Five witches in black hats (some tilted crookedly in the heat of the moment) and various color capes are standing around a cauldron. Each holds a parchment scroll (or a toad dangling by one leg, or some herb) in one hand and a wand in another, and they are clearly arguing about who has the best recipe for whatever spell they’re working on. To the right, five cats of different colors are hissing at each other. Unnoticed by the witches, the potion in the cauldron is beginning to seep over the edge and onto the ground and small flames are springing up. The mood is of unnecessary and unproductive argument among people who truly agree.”

The Wands had a few multi-character cards, AND this one included five cats to boot! A daunting composition to figure out.

Here is my rough sketch. You can see I made a few adjustments from the description: 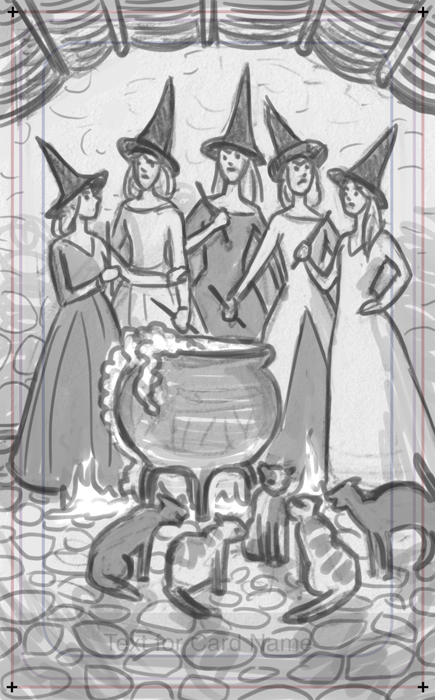 Then I took reference for the witches, using myself as the model for all five of them because I was in Europe at the time and had no one else I could use. The reference is pretty hilarious… 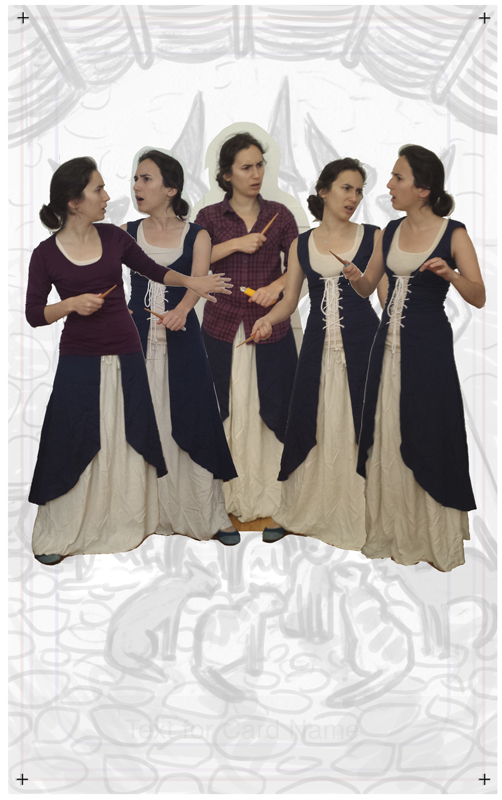 In the end though, it became one of my favorite cards and I love the colors. Here’s the final image (followed by the full text)! 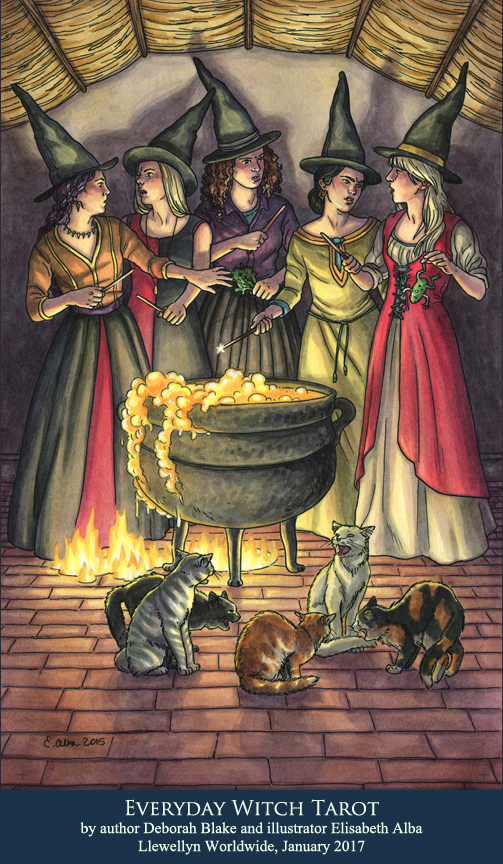 “I know best! No, I do!”
Sometimes it is hard to work with other people. Other times, it’s impossible.
“These witches are the best of friends and all of them are skillful and knowledgeable. Just think what they could achieve if they could actually cooperate. Unfortunately, each one is sure that she has the best recipe, or knows the most powerful ingredients, or which direction to stir the pot in. Now they’re so busy arguing, nobody is stirring the pot, and you can almost see the explosion that is sure to come. Let’s hope they come to their senses in time and remember that they can achieve much more working together if they can all just stop trying to be the one who is right.

Things to consider: If the Five of Wands shows up in your reading, it probably means that you are dealing with some kind of chaotic situation involving other people. Family, co-workers, friends—whoever it is, they clearly aren’t playing nice together. Are you? Maybe you can be the peacemaker, the one who helps everyone to come together in a more productive way. Maybe this is a situation that can’t be resolved, and you would be better off walking away. Sadly, you can’t make other people behave reasonably, but you can make sure that you aren’t making things worse by letting your ego or pride get in the way of cooperation. You wouldn’t do that, would you?”

The deck will be published by Llewellyn Worldwide in January 2017.
Meanwhile, you should consider pre-ordering the Modern Spellcaster’s Tarot, written by Melanie Marquis and illustrated by my husband, Scott Murphy!