Deborah and I are totally pumped about the upcoming publication of the Everyday Witch Tarot! What a long process… to finally see the finished product and hold it in our hands will be amazing. We’d like to share two more images from the deck, as well as throw another GIVEAWAY!!! See bottom of post for info about the giveaway.

It’s been a tough few months. We thought the Tower and Strength cards from the Major Arcana would be appropriate cards to share during this time. 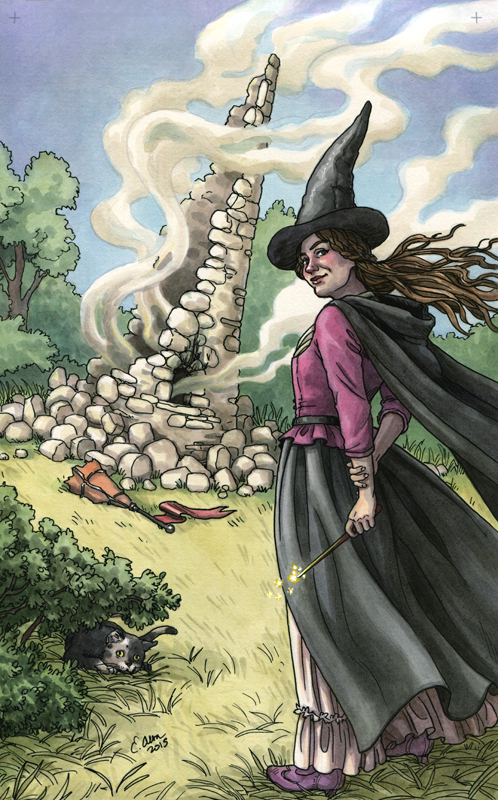 “Chaos and destruction—things go boom.”
Sometimes things have to crash and burn to make room for something new and better.

Deborah writes, “The Tower is one of the cards people find most frightening, since it always denotes some kind of chaos and major change (usually one that doesn’t show up in a positive manner). My take on it is a little different, as you can see from what I wrote in the Everyday Witch Tarot book. I’m not saying that things don’t look BAD when this card shows up…just that we need to look past the obvious “towering” that’s going on, to see if there is a glimmer of light visible through the smoke.”

From the book: A fairy tale tower lies in smoking ruins. To one side is a witch with a mischievous look on her face, a wand hidden behind her back with tiny sparks shooting out of it. A black cat peers cautiously out from underneath some nearby bushes. The witch is wearing a black pointed hat and a black cape, and both the cape and her long dark hair are blowing in the wind created by the explosion. The feeling of the card is wild and chaotic, but not depressing. In fact, you suspect that perhaps this witch has purposely blown things up. You just can’t for the life of you figure out why.

Life rarely runs smoothly, but there are times when it seems as though our entire existence is crashing down around our ears. Jobs are lost, relationships implode, we lose friendships that we treasured. Some of this is just Life. After all, as everyone knows, Stuff Happens. But much of the time, that chaos and destruction has to occur to make room for something new and better. Take heart. Try to see the positive in even the worst situation. You can survive the blast.

Things to consider – Depending on where this card falls in the reading, the explosion may already have happened, you may be in the midst of the chaos, or disaster may still be on its way. If the tower has already gone boom, what can you learn from the experience? What new and positive things can rise out of the ashes of what you have lost? If you are in the midst of the mess, how can you cope better or who can you ask for help? If the crisis is on the horizon, how can you prepare better, now that you know it is coming? Look deep and you may find that you already knew there was something you had to let go of, no matter how difficult the process might be. What can you build out of whatever remains? 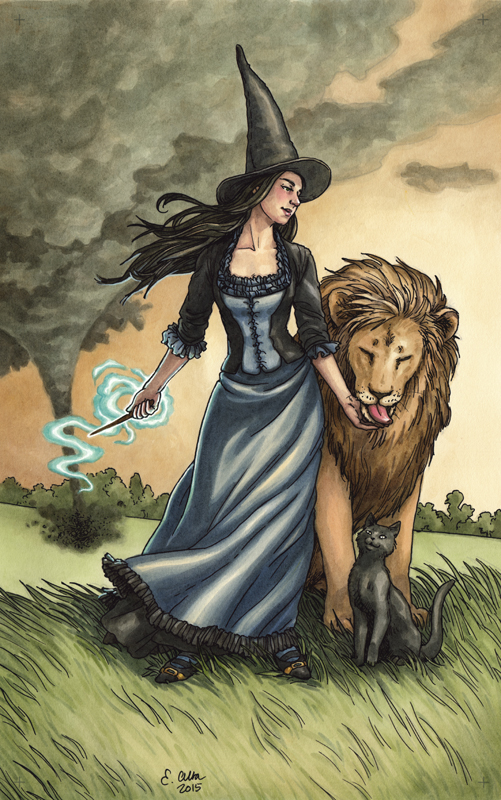 “I am power, hear me roar.”
You are stronger than you think.

Deborah writes, “From Deborah: Strength is one of my favorite cards in any deck, and especially in ours (I just love the way Elisabeth drew it). It is a good card to get along with The Tower, since it shows that you have the strength you need to deal with whatever is going on.”

A witch in a black hat points the wand in her right hand off to the side, pushing away a powerful storm. Light is streaming out of the wand, and a funnel cloud can be seen moving away, taking darkness with it. The rest of the card is light, and the witch is so confident in her magic that she isn’t even looking in that direction. Instead, her attention is directed at the giant lion to her left, which she is feeding a cookie to with her other hand. At its feet sits a black cat, looking proud, as if it is saying, “It followed me home, can I keep it?”

There is a lot of power in the Strength card, but it isn’t because the witch has more magic than anyone else, or can turn you into a toad without a second thought. (Although both of those may be true.) Her power comes from confidence in her own abilities, and knowing that the universe makes all things come right in the end. Even her cat has that kind of confidence, and views the huge lion as just a slightly larger member of the family. The Strength card reminds us that we have what it takes to triumph, no matter what comes our way.

Things to consider: If this card appears in a reading, it is almost certainly there to remind you of your own inner strength. It is saying, “Yes, yes you can.” You may feel overwhelmed or uncertain, but whatever you are facing, you have the strength to endure, and in the end, triumph.

And now, finally, THE GIVEAWAY!!!

Over on Deborah’s blog, at the bottom of her post, you will see the giveaway. Here’s the link: http://deborahblake.blogspot.com/2016/11/less-than-two-months-until-tarot-release.html. We’ve got two items for two lucky winners! Deborah is giving away the mini Tarot to Go! set, and I am offering a lined hardback notebook featuring the art for the 9 of Pentacles on the front! Good luck! 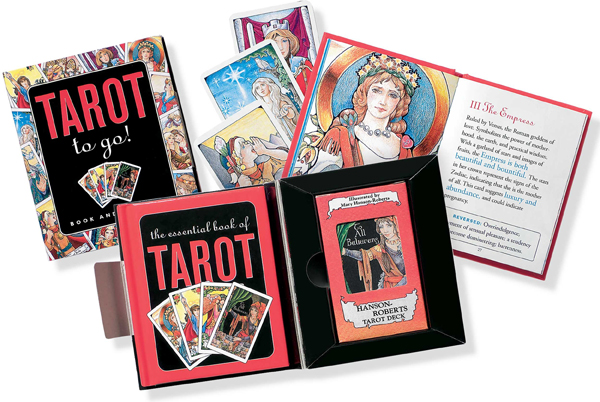 128 page journal for all your tarot note-taking!

If you don’t win the journal, fear not! You can get your own at www.redbubble.com/people/elisabethalba/collections/593678-everyday-witch-tarot.